Create your own Engagement Score

Some media folk like to create a special type of ROI report, sometimes referred to as an “engagement score,” which might combine some metrics to determine actual engagement with a story, versus a simple “potential audience” metric (which is not truly accurate in any respect). 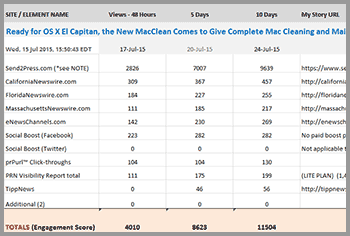 Previously Send2Press created an average score for you, which averaged between 2500 and 3500 reads/views for each story for Standard level plans, and 3000 and 3500 for Premium level plans. Those using a Social Boost upgrade, would have seen higher numbers based on the reads generated via Facebook (and with larger boost campaigns, with Twitter).

However, since this number varies by project and over time, it’s more useful for you to track and manage this data at intervals from the information we provide in the PRtrax™ report, PRN VR report (if applicable), and on-page read counters on various websites.

METRIC SOURCES:
To create your own “readership metrics” report, you would locate and copy/paste the data from these potential data points:

NOTE: As of August 2017, CaliforniaNewswire.com no longer shows “reads” for stories or tracks them at all. However for a general estimate, you could presume reads would be double that of eNewsChannels.com.

In this practical example, we tracked three stories, issued Monday Jan. 23, then created readership score charts on Friday morning, Jan. 27, 2017. Web-crawler hits (“bot views”) are NOT included in this data as our sites reject that info in the hit counters (e.g., with 1,000 actual views, there would be 3,000 additional views from bots on S2P and PRN main sites). Also, with “Premium LITE” plans (example “C” below), PRN does not count any media views, as not pushed to trade media.

NOTES:
*S2P and CANW reads do not include Apple News App full-text reads, which could be 20-50% additional reads (you could optionally upscale these numbers).
**MANW posts stories next day from original push date.
***ENC posts news 2-7 days later than orig. story push time (e.g., Jan. 26 vs. Jan 23).
****Free FB promoted post, included with National plans (was not paid upgrade, which would have been much higher!).

Creating your own “Reads/Engagement Score” is very simple, using the on-page readership info on most of our sites, as well as information found in this PRtrax™ Report. Additionally, you can get a better view by updating the information at 48 hour, 5 day and 10 day intervals (or 7 and 14 days if you prefer). Data will drop off (reduce in frequency) after these initial periods unless something gets a major media link, or otherwise goes “viral” in some way.

Download both files to your hard drive, then open to view.

These templates are provided as a courtesy, but no support is provided for using them or creating this kind of report.

All text, images, files and content on this page is Copr. © 2000-2017 by Neotrope®, and written/developed by Christopher L. Simmons — all rights reserved. May not be republished or shared online without express written permission.